This comfortable 18th century manorhouse just outside Bergerac has a large heated swimming pool, a private tennis court, riding stables, wifi,hifi,large screen TV with French and UK satellite systems and an excellent cook. It is an ideal venue for both large houseparties, familiy groups as well as smaller numbers who appreciate the calmness of the French countryside being in the heart of the Dordogne yet close to the lively town of Bergerac. If the manorhouse is rented with the annexe or wing, it can sleep a maximum of 16 people in 8 double bedrooms all with private bathrooms. There is also a pigeonnier which sleeps another 4 people so maximum numbers are 20. The house is centrally heated so it can be rented throughout the year and it is only 10 minutes from Bergerac airport so easy access from the UK and Paris is assured.

Le Bourdil is ideally situated close to all the tourist attractions which make the Dordogne area such a great holiday venue. 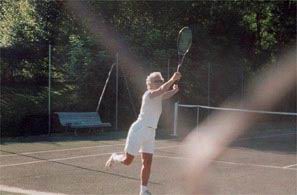 There is much to do on site at the Bourdil Blanc swimming, playing tennis and boating and fishing. In addition the tourist sites of the Dordogne are within easy reach.

Le Bourdil Blanc is looked after by a local resident who lives close by and is always available to give advice. She is a very good cook and can provide meals as and when required. Other services which can be prearranged are additional cleaning, baby-sitting, shopping, wine tasting, golf trips, historic tours and restaurant bookings.

with beautiful views over woodlands and fields

Aside from the heated pool (12 x 6 m2), the private tennis court and barn, the seven acre grounds also feature a large meadow garden, a small fishing/boating lake, where you can try your hand at catching one of the fat carp or simply watch them from our rowing boat, some lovely mature trees, all bounded by a delightful trout stream. From the house one can enjoy beautiful views over woodlands and fields and there is a hammock to relax in 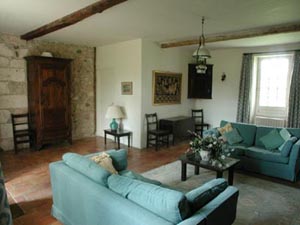 The house sleeps a maximum of sixteen , the accommodation comprising

- A large entrance hall/study which leads onto an outside terrace for serving drinks and meals and
- the main living room (50 m2) with an open fireplace, a 42 inch plasma high definition TV with French and English satellite , video, DVD player, hifi and comfortable seating for a large number of people
- and also a dining room with fireplace seating 16-20 people
- A modern fully fitted and equipped kitchen complete with two dishwashers, two fridge freezers, a washing machine, separate dryer, microwave and washing machine and dryer

A staircase leads from the living room upstairs to:
the first floor which sleeps a maximum of eight people:
- Four large double bedrooms (one with two single beds which can be used as a double, two each with double beds and one with 2 single beds) with one ensuite bathroom and three ensuite shower rooms each with wc's.

The wing (annexe) comprises a large living room with open fireplace and 2 double sofa beds, a double bedroom (with double bed), a second fully fitted and equipped kitchen with washing machine and dishwasher, a showerroom with wc, basin and shower and a private walled garden.

There are numerous cots and cribs and three high chairs for children.The house is centrally heated with 2 working fireplaces. There is also a telephone, fax, various TVs with French and UK satellite, stereo , wifi and a mini grand piano

Games include table tennis and various board games and there is a small rowing boat for fishing on the lake.

*Note to the rental rates

- All prices are per week per property from Saturday to Saturday Owners may be willing to accept mid week rentals or part week rentals in the low and mid season .Please email us your requests. We’ll be happy to answer your queries. Please book well in advance for peak season bookings as the best weeks tend to go quickly.

- Prices are quoted in Euros. If you choose to pay in £ sterling or US dollars please pay the equivalent rate quoted on the site which is approximate only. We will inform you when you pay what the exact equivalent amount is in Euros that you have paid, since it depends on the exchange rate on the day.

- Payment can be made by bank transfer, cheques in sterling or in Euros or by credit card. Prices are net of bank charges, i.e. tenants are expected to pay all bank charges. Payment by credit card through our secure Internet server incurs bank charges of 2% of the rental.

- A 33% deposit is required with the booking. The final balance is due three months before arrival ( a shorter period may be arranged for last minute bookings). A security deposit as defined for each house is required to be paid with the balance . This covers the cost of any damage or breakages and the cost of telephone and other services. This deposit will be returned after the rental, minus any charges for breakages, telephone, etc.

- Rental rates include: all linen, bathroom and kitchen towels, if renting more than one week cleaning on the Saturday of three hours with change of linen, electricity, gas, firewood and water and pool heating if available

- Renters should arrive between 17.00 and 19.00 as cleaners need the house to be free for cleaning on changeover day until this time. Please try not to arrive at the house until that time. Departure date : for the same reason, please vacate the house (or all except one room) by 10.am